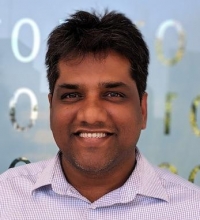 Qureshi joined the School of Computer Science in July to bring his expertise in this area.

Quantum wasn’t always Qureshi’s research area. He received his Ph.D. from University of Texas at Austin, where he studied cache management. He then worked at IBM on emerging memory technology. When he started at the School of Electrical and Computer Engineering in 2011, Qureshi’s areas were memory systems, computer architecture, and hardware security.

It wasn’t until 2016 when a student came back from a Microsoft internship with a new interest in memory system for quantum computers that Qureshi started working in the area. Until 2016, research in quantum computing had mostly a theoretical bent, and Qureshi was skeptical of the practical implementation and use. That all changed once IBM made the 5-qubit machine available via cloud for public use and users could run programs on real quantum computers.  Since then, companies such as IBM and Google have demonstrated machines with 50+ qubits, and the progress in machine capacity is expected to accelerate in the coming years.

“My background is computer systems, not quantum physics or quantum information,” he said. “Before 2016, there was no obvious bridge to do system-level research in quantum computing”

Moving from Engineering to Computing

As Qureshi’s research shifted more into quantum, it became clear he could make more headway in the field if he joined the College of Computing, where it would be easier to work with researchers in programming languages and software.

“The chance of collaboration, the chance of learning and doing impactful research, and teaching quantum computing courses is higher in College,” he said.

Qureshi’s goal is to improve software to make quantum computation less susceptible to errors. Some of his recent work uses diversity to reduce the errors in quantum computation. Qureshi also led a collaboration with Oak Ridge National Labs (ORNL) that allows Georgia Tech employees to have access to the state-of-the-art quantum computers from IBM.

“The content on quantum computing can be intimidating, and sometimes it may feel like you need a Ph.D. in physics and another Ph.D. in mathematics to make sense of the material” said Qureshi. “However, if you are interested in doing research at the system and software level, then the problems are similar to typical systems and abstractions can go a long way in making progress.”

With this in mind, Qureshi is teaching an Introduction to Quantum Computing graduate class this fall and hopes to bring quantum to the Online Master of Science Computer Science (OMSCS) program by 2021.

“The exciting aspect of doing systems research in quantum computing is that the field is only getting defined right now, and you have more of a chance of making a bigger contribution in a field of when you go in early,” he said.